Province celebrates its 100-year relationship with the world expo

An opening ceremony will mark the start of Shandong Week at Expo Milano 2015 on Sept 16 and will celebrate the province's 100-year relationship with the world expo.

Despite transport difficulties and a lack of funds, more than 11,000 Chinese-branded items were displayed at the Panama Pacific International Exposition in San Francisco in 1915 and won 1,218 golden prizes. The number remains the record high with Shandong enterprises contributing much of the items.

"We are aiming to encourage Shandong enterprises to cling to their old spirit and make new achievements via the platform of the world expo," said Xu Qing, office director of the Organizing Committee for the Shandong-themed week at Expo Milano 2015 and head of Shandong Subcouncil of the China Council for the Promotion of International Trade.

"For the past 100 years, the mentioned Shandong enterprises have always cultivated their brands," said Xu, "we hope they will continue the mode of brand-building, which is a glory not only for them, but also for the province as a whole."

Dong'e Ejiao (DEEJ) is China's largest producer of ejiao, a traditional Chinese medicine made from donkey hide, also known as DHG (donkey hide gelatin). It is known to improve blood circulation and boost energy levels. As a beauty product, it is popular with women. Ejiao has a history of more than 3,000 years in Shandong. In the middle of the Qing Dynasty (1644-1911), it was a product reserved for the royal family. Located in Dong'e county, Dong'e Ejiao has formed the tradition of making ejiao from locally reared donkeys and its methods are recognized as a national nonmaterial cultural heritage.

During the 2010 Shanghai World Expo, Dong'e Ejiao products were exhibited in the Chinese Pavilion and won a gold prize.

"This is the third time we have entered the world expo," said Qin Yufeng, CEO of Dong'e Ejiao and inheritor of the art. "We hope to let the whole world know about Chinese traditions, health-building and nourishment."

During the 1915 expo, four Changyu wines won gold, which prompted the enterprise to adopt an export-oriented mode.

"A good enterprise is the best name card of its home city," said Zhou Hongjiang, chief manager of Changyu. "We will continue ensuring good quality of our products for the honor of an award-winning brand."

At the 2015 China Food and Drink Fair, held on March 26 this year, Changyu announced that sales of its star product, Changyu Jiebaina, exceeded 400 million bottles in total, making it one of the biggest wine products in the world. Changyu's products are exported to 28 countries. Waitrose, which supplies wine and liquor for the British Royal family, started selling Changyu Jiebaina in its supermarkets in 2012. 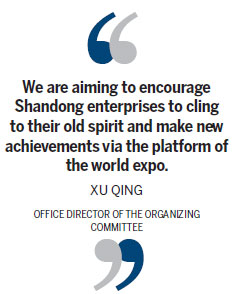 Shandong provincial authorities listed 252 brands in its list of encouragement to prompt them to carry out more independent research and development and promote global influence. Foton Lovol, a producer of heavy machines such as agricultural devices and engineering machines, and Weichai, a producer of automobile parts and equipment, are also included in the list.